SilkAir or SilkAir Private Limited is a wholly owned subsidiary of Singapore Airlines. It is also known as SilkAir Private Limited. The airline was founded in the year 1976 and at that time the company was a part of the regional air-charter company called Tradewinds Charters. The company got its present name SiilkAir, after a significant marketing renovation in the year 1992.

SilkAir operates scheduled passenger services from Singapore to 44 cities in Southeast Asia, the Indian Subcontinent, China and Australia. Its central hub is Singapore Changi Airport, and it offers the frequent flyer programme under the name ‘KrisFlyer.’ According to reports, in March 2013 the airline flew 3.3 million passengers and made a profit of S$96.7 million, as revenue rose 12.7% to $846.0 million.

SilkAir’s exceptional service not made it a leader in the aviation sector, but also bestowed it with some of the prestigious awards:
Regional Airline of the Year by AirlineRatings.com in 2014
Voted in the Top 10 List of 'Best Airlines Worldwide for Cabin Service by Smart Travel Asia in 2014
"Excellence in Airline Services" award by Business Deepika Awards 2014 (Kochi) in 2014
Five-star Airline in the eye of Sichuan Travellers- Golden Wing (Chengdu) in 2014
Regional Airline of The Year in Air Transport News (ATN) 2013 Awards

Following is the list of all the latest offers on SilkAir Airlines Air Tickets Booking from Silk Air and Travel Agents in India. 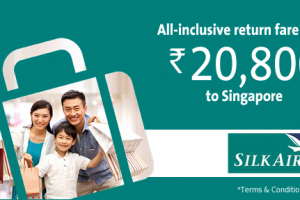 There are regular flights offered by Silk Air to top cities in India like Bengaluru, Chennai, Hyderabad, Kolkata and Kochi to name a few. Silk Air also serves a number of destinations in China, such as Changsha, Chengdu, Chongqing, Kunming, Shenzhen and Xiamen. It also covers a number of locations in Indonesia and Malaysia like Bandung, Balikpapan, Lombok, Surabaya, Kuala Lumpur, Langkawi and Penang. Silk Air also flies to countries like Myanmar, Nepal, Philippines, Vietnam and Thailand. Passengers can also fly to Australia and Cambodia with Silk Air as it serves Darwin, Phnom Penh and Siem Reap. The airline has a weekly schedule of around 315 flights covering 41 destinations in 12 countries.