SriLankan Airlines is the major airline carrier of Sri Lanka. It is an IOSA certified airline, with the headquarters in Katunayake. The airline operates hubs at Colombo, and Mattala, and has a strong foothold in South Asia, Middle East, Europe, and Southeast Asia. In the year 2014, SriLankan Airlines became a member of the Oneworld Alliance. Currently, the airline provides service in 92 destinations across 44 countries. It is the first and only airline in South Asia's to have onboard wifi connectivity.

SriLankan Airline’s fleet comprises 25 airbuses. SriLankan airline was the first in Asia to use the A340, i.e., used in high-density flights to the Middle East, Southeast Asia, and Europe. The average age of the aircraft is 10.8 years.

Currently, SriLankan Airline operates 258 weekly flights to 33 destinations in 20 countries, covering the main cities of Europe, the Middle East, India, South East Asia, and the Far East. The airline serves codeshares with 15 countries which makes it the most significant international carrier serving the Maldives. Bandaranaike International Airport is the biggest hub and serves SriLankan airline's destinations. 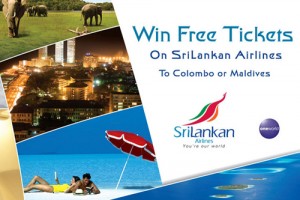 Experience the Srilankan hospitality on board and get a chance to win free tickets to Colombo or Male every week. Book Ex-India SriLankan Airlines roundtrip tickets from Akbar Travels and...