Day 02 / Delhi – Agra – Jaipur ( By train and car )
Early morning pick up from hotel & transfer to railway station to board the superfast air-conditioned train to Agra. Breakfast in the train, Arrive Agra in approx. 02 hours & visit the magnificent Taj Mahal – one of the seven wonders of the world surely the most extravagant expression of love ever created. 20,000 men laboured for over 17 years to build this memorial to Shah Jahan’s beloved wife. Also visit the Agra fort – the rusty and majestic red-sandstone fort of Agra stands on the banks of the river Yamuna and the construction was started by Emperor Akbar in 1566. At the Diwan-I-Am (hall of public audience), a colonnaded hall of red-sandstone with a throne alcove of inlaid marble at the back, the Emperor heard public petitions. At the Diwan-I-Khas (hall of private audience)where marble pavilions with floral inlays lend an ethereal ambience, the Emperor sat on his gem-studded Peacock Throne and met foreign ambassadors and rulers of friendly kingdoms. Afternoon drive to Jaipur enroute visiting Fatehpur Sikri-a perfectly preserved red sandstone “ghost town” which was the estranged capital of mughal emperor Akbar, built in 1569 and deserted when its water supply failed. Arrive Jaipur & transfer to Hotel. Night stay in Jaipur.

Day 03 / Jaipur – Delhi ( By train )
After a leisurely breakfast , visit the majestic Amber Fort, is one that cannot be easily described. Ride up on Elephants to the former capital of the royals set against the backdrop of the wooded hills. Later visit the City Palace, Palace of Winds also known as Hawa Mahal, this elaborate building, now little more than a façade, is encrusted with delicate screens and carved balconies from which the royal ladies, confined to their quarters, could sneak views of the outside world. Past, present and future merge at Jai Singh’s observatory, where time has been accurately measured since the 17th century. Evening transfer to railway station to board the luxurious air conditioned train to Delhi, Dinner in the train. Arrive Delhi & transfer to hotel. Night stay in Delhi. 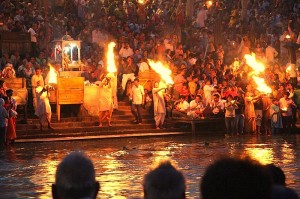 Day 05 / Delhi – Haridwar
Morning pick up from hotel & drive to Haridwar. Arrive Haridwar & transfer to hotel. Afternoon visit various temples including Pareshwar Mahadev Temple, Daksha Mahadev Temple and Mansa Devi Temple. Evening visit Har-ki-Pauri (the footstep of God)- one of the most sacred ghats in India. People say that this ghat was built by Vikramaditya in memory of his brother Bhartrihari. This ghat is also known as Brahmakund. Later witness Aarti of the Holy River Ganges. Aarti is the beautiful ceremony in which deeyas (the oil lamps) are offered to God. Aarti can be done to a deity in the temple or it can be done to a saint. It is performed to God, in any manifestation, any form, by any name. The essence of the aarti ceremony is a time when we say “thank you,” and we offer the light of our thanks, the light of our love and the light of our devotion. We realize that the small deeya is nothing compared to the divine light which shines on us all day. Night stay in Haridwar. 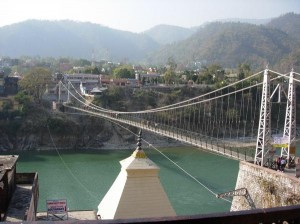 Day 06 / Haridwar – Rishikesh – Delhi – Departure
Morning spend 01 hour with astrologer to discover your future, love fortune, lucky number, compatibility with your life partner, zodiac signs, professional astrological information or any other information required by you. Later drive to Rishikesh – also known as the ‘place of sages’, at the confluence of the Chandrabhaga and Ganga. It is believed that God by the name of ‘Hrishikesh’ had appeared as an answer to the hard penances by Rabhiya Rishi and henceforth the place derived its name. It is the starting point for the Char dham pilgrims but also for the people who are interested in meditation, yoga and other aspects of Hinduism.

In Rishikesh visit Laxman Jhula- a hanging bridge on the river Ganga is one of the most famous spot in Rishikesh. According to Indian mythology, Lakshman, the younger brother of Lord Rama crossed the Ganga with the help of hanging bridge made of Jute. The bridge offers a scenic view of the river Ganga as it tumbles down to Haridwar. Also visit Bharat Mandir – the oldest temple in Rishikesh, near the Triveni Ghat. This temple is dedicated to Bharat, the younger brother of Lord Ram. Optional activities -White water rafting. Later afternoon drive to Delhi & transfer to airport to board the onward flight.

Package Posted on : Aug 25, 2012
Package Valid for Limited Period Only

To Get the latest 2022 quote for this "Golden Triangle With Haridwar and Rishikesh for 05 Nights / 06 Days from Culture Holidays" travel deal package, contact our travel agent by this Travel Booking Form

If you have not decided yet or wants to customize tour itinerary or hotels listed above in "Golden Triangle With Haridwar and Rishikesh for 05 Nights / 06 Days from Culture Holidays", then we can change the travel itinerary and make a personalized, tailor-made holiday package, especially for you. We can modify this travel package as per your itinerary, budget, duration and the tourist places you would like to visit, including transportation and airfare should be included or not. Please fill the form below to contact us.

Give your Feedback, Reviews or Comments on: “Golden Triangle With Haridwar and Rishikesh for 05 Nights / 06 Days from Culture Holidays”