Arrive at Lucknow Airport. Our representative will meet you at the airport and we drive to Nepalgunj. This is a one-lane highway so the drive will take us anywhere from four to six hours depending on the traffic. On arrival at our hotel, welcome drinks and time to unwind. The swimming pool is available.

Lies at the juncture of mid-western Nepal. This is basically the Nepal plains and can be hot and humid.

6:30 AM Transfer to Nepalgunj airport for flight to Simikot. An exhilarating flight of 60 minutes via the mountainous terrain of western Nepal. On arrival at Simikot, we will halt at the airport with refreshments while our crew complete Nepal immigration formalities before continuing our helicopter flight to Hilsa. On arrival at Hilsa to be greeted by Karma la, head man of Hilsa and escorted over the Nepal – China friendship bridge to our vehicles waiting on the other side. Our luggage will be taken care of by the local committee porters. A brief bag check by the Chinese border security and after this we continue our drive to Purang. On arrival at Purang, check into our rooms while immigration officials prepare the immigration formalities. This briefly means checking your passport with your self and then we are free to retire and relax.

After a leisure breakfast, we will go for a short excursion drive to Kejia village. Here situated in the middle of the village is the Kejia monastery. This monastery is also known as the Khojarnath temple. A resting place of Lord Ram, Lord Laxman and Goddess Sita.

Chenga Sherab Jungne (1187-1241) bestowed the king of Purang, Jowo Atigman (jo bo a tig man), with spiritual teachings and the transmission of Mahamudra. In turn, as a token of appreciation, the king presented the Drikung order with additional territories and with the famous shrine of Khoja (Kho char lha Khang), known as the shrine of Khojarnath. Up to the present day the impressive building, surrounded by whitewashed stupas and a large wall of mani-stones and yak-skulls inscribed with mantras, is one of the foremost objects of pilgrimage in western Tibet. During the period in which Drikung took control of Khojarnath, in 13th and 14th century, the Drikungpa found also patronage in the Buddhist rulers of the Khas Malla kingdom in Western Nepal. Once this visit is over, we head back to Purang town and our time is at leisure to roam the back alleys of Purang or rest as per our personal preferences. 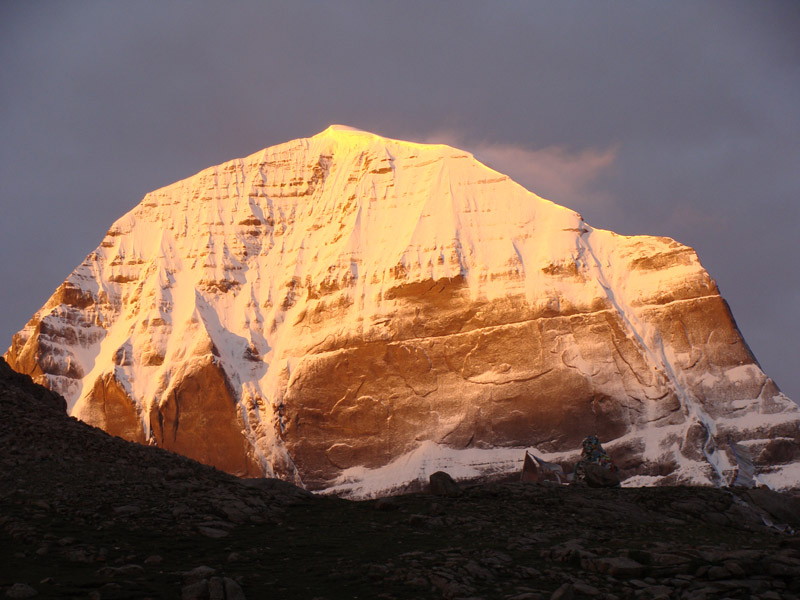 Kailash Mansarovar Sunset
Mansarovar, too, Tibetans know as Mapham Tso, the ‘Unconquerable Lake’. The name records a magical contest between the Tibetan poet and mystic Milarepa, and the Bon priest Naro Bhun Chon which occurred here in the tenth century. Their tussles are marked in numerous sites around the region. In any language, it is the holiest most famous lake in Asia. For Tibetans, Mt Kailas is the mythical palace of Demchok, the powerful Tibetan

A wake-up call with bed tea coffee as per predetermined time. Thereafter breakfast and leisure drive of to Lake Mansarovar. Here we start our parikrama of the holy lake via Chui Gompa stopping at Trugo Gompa at noon to take a picnic lunch and sthan. The afternoon waters of Mansarovar are relatively warm so that taking our sthan (purification bath). Here we also do our Havan puja, performed by our pundit with both Mansarovar and Kailas in front of us. On completion of our puja and parikrama, we then drive back to our guest house. En-route we stop prior to Lake Rakshastal and our first glimpse of Holy Mt. Kailas. Directly after crossing the Rakshastal pass, we come face to face with this famous LAKE – Ravan Tal (Rakshastal); At our leisure, we complete our parikrama at the banks of Chui Gompa to be greeted by our staff with Warm refreshments and snacks. Dinner will be served around 07.30 in the evening. Ravan tall (Rakshas Tal, Langka Tso) Is famous for being the lake of the lord Ravan (learned of all gods). In the Jain version of Ramayana, Ravana is one of the Trisastisalaka Purusa (63 illustrious persons) who appears in every time cycle. According to Jain cosmology, every time cycle has nine sets of Baladeva (Bala Bhadra), Vasudeva (Narayana) and partivasudeva (anti-Vasudeva or anti-hero). Rama, Lakshmana and Ravana are the eighth Baladeva, Vasudeva, and Partivasudeva. In the Jain epic of Ramayana, it is Lakshmana who ultimately kills Ravana and not Rama as told in the Hindu version. In the end, Rama who leads an upright life renounces his kingdom becomes a Jain monk and attains moksha. On the other hand, Lakshmana and Ravana go to hell. However, it is predicted that ultimately they both will be reborn as upright persons and attain liberation in their future births. According to Jain texts, Ravana will be the future Tirthankara (omniscient teacher) of Jainism. Ravana at first went to meet Shiva. Nandi the vehicle of Shiva, refused to let Ravana in. He got annoyed And started teasing Nandi. To show Nandi his love for Shiva, Ravana attempted to uproot and move the mountain on a whim. Shiva, annoyed by Ravana's arrogance, pressed his littlest Toe on Kailash, pinning him firmly and painfully under it. His Ganas informed Ravana of whom he had crossed, upon which Ravana became penitent. He plucked his nerves and used them as strings to compose music and sang songs praising Shiva, and is said to have done so for years until Shiva released him from his bondage. Pleased with his resilience and devotion, Shiva gave to him the divine sword Chandrahas (Chandra-Moon, Haslaugh, literally 'the laughter of the moon' but referring to the shape formed by a crescent moon which resembles a smile). It was during this incident that he acquired the name 'Ravana', meaning "(He) of the terrifying roar", given to him by Shiva - the earth is said to have quaked at Ravana's cry of pain when the mountain was pinned on him. Ravana, in turn, became a lifelong devotee of Lord Shiva and is said to have composed the hymn known as Shiva Tandava Stotra. After Ravana had been given the Celestial juice of Immortality by Brahma, he went on to please Shiva. He cut his head and put it as the sacrifice for pleasing Shiva, but Shiva replaced his head with a new one. This Was repeated Nine times, on which Shiva was happy & pleased with Ravana's resilience & devotion. Thus he also got name Dasa-sheesha. In Buddhist philosophy it is believed that centuries ago two goldfish of Mansarovar dug a channel Through Lake Mansarovar to Lake Ravan tal bringing the purified waters of Manas to Rakshas Tal thereby purifying the lake – this channel is still visible and is know as the Ganga chu. Day - 5 - Darchen (4610 M), 30 KM About 30 km north of Lake Manasarovar is Darchen, the main gateway to Mt. Kailash. Here we organize yaks or ponies for the Kailash circuit trek. The last portion of the drive takes us approximately one hour directly towards the Kailash face. Roads are a little rough but worth it to see the close-up view of the south face of the holy mountain. It is via this route also that the inner parikrama is performed. Astapad The first Tirthankara Lord Rishabhdev died in this place. If one can visit this place of the pilgrim, once in a life, He gets ultimate salvation, liberation in that birth only. Such a very significant place of Astapad is located in the north of Himalaya.

Drive 08 km to Tarboche / Shersong (Yamdwar) perform puja near big prayer flag and start parikarma 10 km to Diraphuk. This Kailash circuit covers 53 km and can be done in 3 days. We head west in clockwise direction & after a few kilometres, the trail climbs up to a cairn at 4730 m from where the northern face of Mt.Kailash comes to view. En-route visit Tarboche where annual flag pole raising ceremony takes place during Saga Dawa. Yamdwar (4500 m) Literally means the gateway to death – or rebirth. In Tibetan, it is known as the Changyi Chorten and the gateway to Mt. Kailash. For Hindus, it is known as Yamdwar or the way to salvation through death. It is commonly believed that Kailash – the ultimate parikrama is taking a new birth. Shersong At the foot of the Kailash has a story behind it that once centuries ago a pious Tibetan pilgrim carried all His money in gold and travelled a long distance to make this most hazardous and difficult of all pilgrimages. He finally reached this spot where his money also ran out and from that this place was named as Shersong (Pot of Gold).

Today we cross Drolma Ia pass (5630 M) and Gauri Kund Lake (5608 m) where Hindus worship and immerse themselves in the icy waters of the lake.

The final end of the parikrama is an easy 2-3 hrs walk down to where the river emerges on to the Barga plain. We complete the 3-day circuit trek of Mt. Kailash to be greeted by our vehicles and drivers awaiting us at Lamchu valley and from here drive to Darchen for lunch. After lunch, a leisure drive to Astapad if this is not done previously or continue directly to Tirthapuri. From here we then continue onwards to Purang. Here we will take a short excursion tour to Tirthapuri (Dadapuri) Hot Springs. It is a short drive of approximately 1 hour. Tirthapuri is famous for being the source of Tibetan herbal medication. It is here that Milarepa and Dorjee Phagmo meditated. Dorjee Phagmo is the only female goddess in the Tibetan pantheon of Gods and the consort of Demchog the lord of Mt. Kailash. Tirthapuri (Dadapuri) Located northwest of Mount Kailash in Western Tibet, the Tirthapuri Hot Springs are closely associated With Padmasambhava (Guru Rinpoche). Pilgrims bathe in pools fed by the springs, visit the monastery containing the guru's footprint and dig for healing stones along a one-hour pilgrimage route. The Tirthapuri Hot Springs is located about 80km northwest of Mount Kailash, 65km west of Darchen, and 9km south of Moincer (Mensi). Tirthapuri is accessible by road but there is no public transportation.

After breakfast, drive to Hilsa to catch our helicopter ride back to Simikot and from here our connecting flight to Nepalgunj. On arrival to be met and transferred to Lucknow after lunch. End of tour.

Package Posted on : May 24, 2011
Package Valid for Limited Period Only

To Get the latest 2021 quote for this "8 Nights Kailash Mansarovar Package by Helicopter Ex Lucknow by Deewan Holidays" travel deal package, contact our travel agent by this Travel Booking Form

HI ,
Kindly can you tell me what are the famous places and spots which we can see during our trip via your India Travel Deals group ..

Give your Feedback, Reviews or Comments on: “8 Nights Kailash Mansarovar Package by Helicopter Ex Lucknow by Deewan Holidays”