On arrival at the Nairobi international airport and after customs, visa and immigration formalities, you will be departed for Amboseli after a short safari briefing. Drive south across the Athi Plains, home of the Maasai tribe to the Kenya - Tanzania border town of Namanga and 170 km from Nairobi. Then turn East a further 80 km to arrive at the lodge in time for lunch. After a short rest, depart for your first game drive in this park where big herds of the elephant may be seen with Mt. Kilimanjaro, at 19,340 feet, the highest mountain in Africa in the background. Giraffes, cheetahs and lions can also be seen. Overnight in Amboseli at the Amboseli Sentrim Camp. 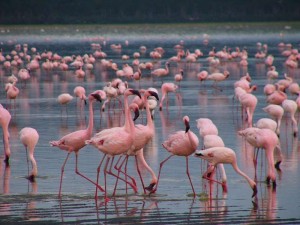 Full day to enjoy the beautiful scenery of the Mt. Kilimanjaro on morning and afternoon game drives. Early morning game drive is the best time to see the snow-capped Mt. Kilimanjaro. Mid-morning, go for an optional bird-watching walk or just relax by the sky-blue swimming pool. Overnight in Amboseli at the Amboseli Sentrim Camp.

After breakfast at the camp, you will depart for the rift valley lakes region and Lake Nakuru National park passing through Nairobi. Arrive at the lodge in time for lunch and later depart for a game drive. Lake Nakuru is home for the largest concentration of flamingoes in the world. The Buffalo, Rothschild’s giraffe, waterbuck and gazelles and other game animals are found here in larger numbers. The Rhino, lion and leopard may also be seen here. Overnight in Amboseli at the Lake Nakuru or similar.

After breakfast at the lodge, you will depart for Maasai Mara Game Reserve. You will arrive at the lodge just in time for lunch. Maasai Mara, covering 1800 sq km is an extension of the world-famous Serengeti National Park of Tanzania. It experiences the worlds largest wildlife spectacle with 1.5 million wildebeests, thousands of zebras, gazelles, topi and other plain game migrate between Serengeti and Maasai Mara every year. Moving in a single file, herds of the game led by the wildebeest move northwards from Serengeti, followed by the predators and scavengers such as lions, hyenas, jackals, and hunting dogs on the watch for newborns and animals weakened by the long trek. Overhead, vultures circle and wait for their prey. Lunch at the lodge and depart for an afternoon first game drive in this park which is home to the rare black mane lion. Overnight in Amboseli at the Mara Sentrim Camp or similar.

Full day in Masai Mara to explore and enjoy the beauty of the vast Mara with morning and afternoon game drives. Alternatively, start the day with an optional early morning hot air balloon ride across the Mara plains followed by a champagne breakfast and a game drive en-route back to the lodge. Overnight in Amboseli at the Mara Sentrim Camp or similar. 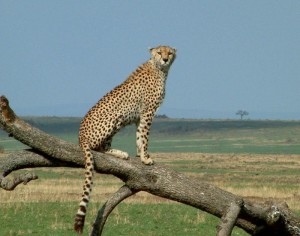 After breakfast at the lodge, you will depart for Nairobi to arrive in the early afternoon and transfer to the airport for your flight to India.

Package Posted on : Aug 23, 2011
Package Valid for Limited Period Only

To Get the latest 2022 quote for this "Kenya Cheetah Trail Tour Package" travel deal package, contact our travel agent by this Travel Booking Form

Give your Feedback, Reviews or Comments on: “Kenya Cheetah Trail Tour Package”