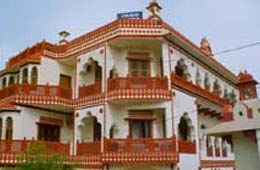 Maharaja Umed Singh II, ruling king of Kota in the early 1900s, who resided in the medieval fort within the city of Kota, decided that he wanted a modern palace for his personal use.
He commissioned Sir Swinton Jacob, an officer of the Royal Engineers in the British Army to undertake the conception and implementation of this project and in 1905, the WelcomHeritage Umed Bhawan Palace, built in the prevalent Indo-Sarcenic style, was constructed.
The city of Kota, on the east bank of the Chambal river, is best known for its finely woven Kota Doria saris or alternatively for its miniature paintings where the subject
matter was predominantly the hunts in the once thickly wooded forests of the area..

This Indo-Sarcenic, early 20th century palace has retained all the clean-cut solidity of the Victorian influence mingled with subtle Rajasthani trends as well as the trappings of royal comfort and aplomb. While the decorated ceilings and the marble corridors speak of its regal origins, the heirlooms and hunting trophies speak of the royal glories and lifestyles of the time.

Package Posted on : Aug 2, 2010
Package Valid for Limited Period Only

To Get the latest 2023 quote for this "Umed Bhawan Palace, Kota Hotel Package by WelcomeHeritage" travel deal package, contact our travel agent by this Travel Booking Form

If you have not decided yet or wants to customize tour itinerary or hotels listed above in "Umed Bhawan Palace, Kota Hotel Package by WelcomeHeritage", then we can change the travel itinerary and make a personalized, tailor-made holiday package, especially for you. We can modify this travel package as per your itinerary, budget, duration and the tourist places you would like to visit, including transportation and airfare should be included or not. Please fill the form below to contact us.

Give your Feedback, Reviews or Comments on: “Umed Bhawan Palace, Kota Hotel Package by WelcomeHeritage”