3 Nights Madurai Rameshwaram & Kanyakumari Tour Package By Get Away Tours

3 Nights Madurai Rameshwaram & Kanyakumari Tour Package By Get Away Tours

Arrive Madurai Railway Station. On Arrival Met & greet by the driver and transfer to the hotel. On arrival check in the hotel and relax for some time. Madurai is situated on the banks of the river Vaigai. Madurai’s history goes back to the 6th century B.C., when it traded with Greece and Rome. According to legend, drops of nectar fell from Lord Shiva’s locks on this site so it was named `Madhuram’, Madurai or nectar city. Famous as a temple town, Madurai is also a major industrial city. The town has developed encircling the famous Meenakshi temple built in the Dravidian style – one for Lord Shiva and the other for his spouse Meenakshi. The temple offers lovely kaleidoscopic views. Outside are the musical pillars which produce different `swaras or notes when tapped. Visit the popular Meenakshi Temple for an in depth tour of the temple complex. Later in the day visit Thirumalai Nayak Palace built by King Thirumalai Nayak in 1636 AD. The palace was designed by an Italian Architect and served as the residence of the King. It is situated at a distance of 2.5 km from the Meenakshi temple of Madurai. The palace is divided into two major parts, Swarga Vilasa and Ranga Vilasa, which include the royal residence, theatre, shrine, apartments, armory, palanquin place, royal bandstand, quarters, pond and garden. In the evening visit to Alagarkoil (30kms/45mins) & Pazhamuthircholai Murugan Temple. Overnight Stay at the Madurai. 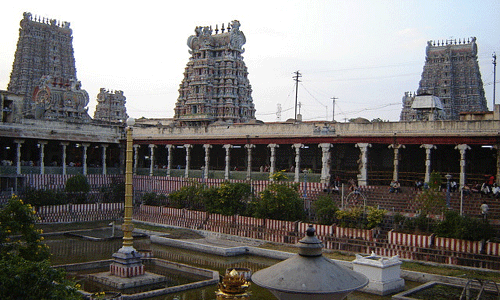 After leisure breakfast, drive to Rameswaram. Enroute visit Uttarakosamangai & Thiruppullani Temples then continue drive to Rameswaram. On arrival check in the hotel and relax for some time Rameswaram is located on Pamban Island separated from mainland India by the Pamban channel and is about 50 kilometers from Mannar Island, Sri Lanka. It is situated in the Gulf of Mannar, at the very tip of the Indian peninsula. Pamban Island, also known as Rameswaram Island, is connected to mainland India by the Pamban Bridge. Together with Varanasi, it is considered to be one of the holiest places in India to Hindus, and part of the Char Dham pilgrimage. Later visit Ramanathaswamy Temple for Darshan. According to Hindu mythology, this is the place from where the Hindu god Rama built a bridge, across the sea to Lanka to rescue his wife Sita from her abductor Ravana. The Ramanathaswamy Temple dedicated to the Hindu god Shiva is located at the centre of the town and is closely associated with Rama. The temple along with the town is considered a holy pilgrimage site for both Shaivites and Vaishnavites. Before visiting the temple, take a holy dip in the sacred sea followed by holy bath at 21 sacred well inside the temple complex. Later in the evening, visit Dhanuskodi – the last few miles will be accessible only by Four wheel drive jeeps. At the end of Dhanuskodi, Ram Setu or Rama’s Bridge the bridge is 30kms long which separates the Gulf of Mannar & Palk Strait. Overnight Stay at the Rameswaram.

Early in the morning, visit the temple again for the Darshan. Post breakfast, visit Ramar Patham (Gandhamadana Parvatham) – marble foot print of Lord Rama and Agnitheertham – sacred stretch of shallow sea, it is believed that lord Rama made this to quench the thirst of Sita by dipping the bow in the sea water. Later check out the hotel and drive to Kanyakumari. Kanyakumari- was named so after goddess Parvathi, in one of her incarnations as Devi kanniya, did penance on one of the rocks in this beautiful land of greenery and blue waters, to obtain the hand of Lord Shiva. In the evening if time permits visit Kumari Amman Temple & Gandhi Mandapam. In the evening witness the Sunset from the beach. overnight stay at Kanyakumari 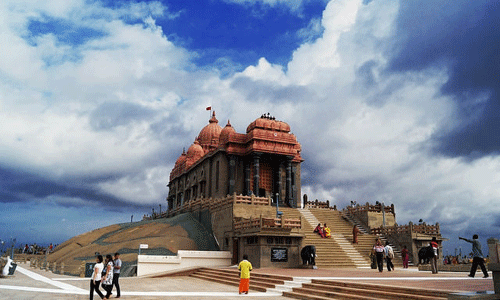 Early Morning, witness the Sunrise from the Thriveni Sangamam. then Visit Vivekananda Rock & Thiruvalluvar Statue by boat. Later visit Suchindrum Temple – situated 13 km from Kanyakumari and is an important pilgrim centre. Suchindrum known as Gnanaranya, is well known for its sculptural wealth. It is one of the few temples in the country where the Trinity, Brahma, Vishnu and Ishvara, are worshipped. The temple enshrines Sri Sthanumalayan, the Trinity of God (Siva, Vishnu and Brahma). The linga is in three parts. The top represents Sthanu name of Siva,the middle Mal name of Vishnu, and the base Ayan name of Brahma. It is believed that the Trinity appeared here at the request of a sage, Atri, and his wife,Anusaya. Images of Vigneswari (a feminine form of Vinayaka), Goddess Aram Valartha Nayaki, Indra Vinayaka, Kala Bhairava and Sakshi Ganapathi are also enshrined. Inscriptions said to be of the 9th century are found in this temple. Suchindrum known as Gnanaranya, is well known for its sculptural wealth. The 134-foot-tall gopuram beacons the pilgrims from a long distance. On the eastern corridor is the shrine of Guru Dakshinamurthy next to Konnaya. The Navagrahas are engraved on the ceiling. On the outer prakaram, there are separate shrines for Cheravasal Sastha, Rama and Lord Muruga. There is an imposing monolithic image of Lord Anjaneya opposite to Lord Rama’s Shrine. It is about 5.5 m high and is said to represent the Viswarupa of Hanuman as shown to Sita at Ashoka Vana in Lanka. On the northern corridor, there are four musical pillars cut out of single granite blocks. Later drop to Kanyakumari Railway . to board a train for your onwards journey. 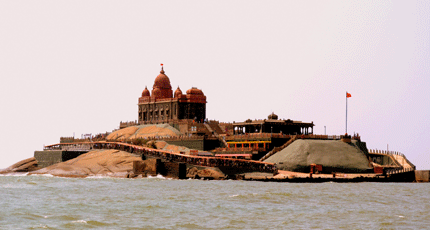 For Booking And More Details Visit www.getawaytours.com And Contact Us At

To Get the latest 2023 quote for this "3 Nights Madurai Rameshwaram & Kanyakumari Tour Package By Get Away Tours" travel deal package, contact our travel agent by this Travel Booking Form

If you have not decided yet or wants to customize tour itinerary or hotels listed above in "3 Nights Madurai Rameshwaram & Kanyakumari Tour Package By Get Away Tours", then we can change the travel itinerary and make a personalized, tailor-made holiday package, especially for you. We can modify this travel package as per your itinerary, budget, duration and the tourist places you would like to visit, including transportation and airfare should be included or not. Please fill the form below to contact us. 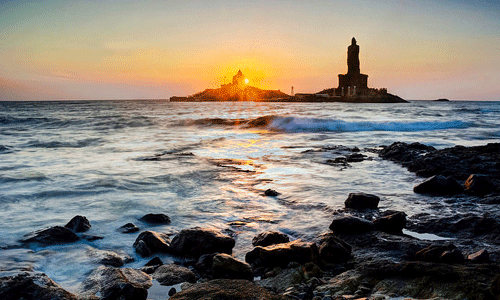 Give your Feedback, Reviews or Comments on: “3 Nights Madurai Rameshwaram & Kanyakumari Tour Package By Get Away Tours”